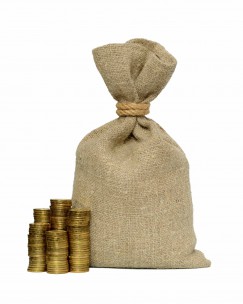 A  boy was walking down the road. Suddenly he noticed a penny.  "Well," he thought, " a penny is money!" He picked up a coin and put it into his wallet. And he began to think: "What would I do if I found a thousand dollars? I would buy presents for my father and mother! He just thought so and felt that the wallet seemed to have become thicker. He looked inside and found one thousand dollars there.
"Strange thing! - the boy was surprised. - There was a penny and now - a thousand dollars! And what would I do if I found ten thousand dollars? I would buy a cow and feed my parents.”
He glanced into the purse and he found  ten thousand dollars there! "What a miracle! - The lucky boy was happy. – What would I do if I found a hundred thousand dollars? I would buy a house, marry a nice girl and settle in the new house with my old parents! ” He quickly opened his wallet - and there turned out to be a hundred thousand dollars!
Then he brooded further: "Maybe I should not take my parents to a new home.  What if my wife doesn't like them? Let them live in an old house. And it is troublesome to keep a cow, it is better to buy a goat. And I won't be able to buy a lot of presents, and the costs are so high ... ”
And suddenly he felt that his wallet had become so light! He was scared, then opened the wallet, looked inside - and there was only a penny, the only one ...